If I were to ask you the question “Do you know the meaning of the word ‘disaster’?” you would probably respond with something similar to “Why of course, Christian! Everyone knows that!” and although it does seem like the answer is fairly obvious, there may be more to this question than you think.

It might surprise you to know that we can reveal a much deeper meaning of “disaster” than the Webster’s Dictionary definition of “a sudden calamitous event bringing great damage, loss, or destruction.” This deeper meaning of the word is called its etymology. Etymology is essentially the history or origin of a word. This includes the original language, roots, and language transitions, as well as any other things that might have been part of the word’s development over time.

For example, “disaster” was originally the Italian “disastro.” Literally translated from its roots of dis- and -astro, this word meant means ill-starred. Of course, without any other knowledge at hand, this doesn’t really make any sense. However, with the knowledge that the people who created this early version of “disaster” blamed most catastrophic events, such as natural disasters, on the positioning and alignment of planets and other astronomical objects, we can begin to understand where this word came from, and thus know much more about the nature of the word itself.

At first glance, it may seem like this knowledge has no practical benefit beyond being mildly interesting, but as much as I would like it to be, my mission isn’t to fill your head with useless little bits of information. Being familiar with etymology has a number of useful applications to both reading and writing.

Knowing the etymology of words gives you a great advantage in figuring out their most effective use. Understanding the original meaning of a word as well as how it’s been used in both the past and present can increase your comprehension of its nuances and connotation. This knowledge will help you differentiate between words that have similar uses or are closely related to each other and allow you to choose the best one for each situation, leading to more masterful use of those words within your writing.

Additionally, there’s the benefit of being able to better grasp the interpretation of literature from across all of time. As etymology deals with the development of words from their very conception, it can assist in comprehension of language from any time period. So next time you pick up that first edition copy of “The Ruba’iyat of Omar Khayyam” (circa 1100), remember to break out some of your new etymology skills along with it. 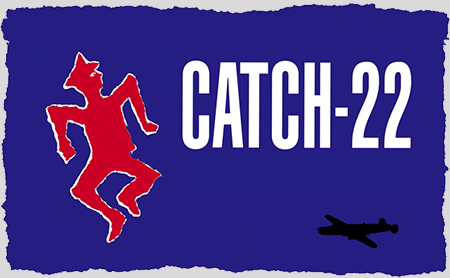 Most people have heard of this infuriating conundrum: to get a job, you must have experience, but to get experience, you must get a job. This seems stupid and illogical; how is it reasonable to expect someone to obtain something if the simple act of needing it is enough to justify denying it? This type of logical fallacy is often known as a “Catch-22.” But why is it called a Catch-22? What’s so special about twenty two specifically?

In 1953, Joseph Heller began writing a novel that would be released in 1961. The book starred Captain John Yossarian, a B-25 bomber pilot staged in the Mediterranean during WWII. On each bombing mission, around 5 out of 100 people were killed in action. Naturally, Yossarian and his compatriots often sought ways to get out these dangerous missions as they valued their own lives.

The ultimate escape from flying these missions was to be deemed mentally unfit for duty, or in simpler terms, being insane. To be insane, all one had to do was to willingly throw themselves into dangerous situations, such as flying on a bombing run, since having no regard for one’s safety is insane. However, to be considered insane, one also had to request that their sanity be evaluated. While this may seem like an easy way out for Yossarian, there was one major problem: the act of requesting an evaluation shows rational concern for one’s safety, something only a sane person could do. This entire system of determining sanity and insanity was justifiable under the rule from which the book draws its name—Catch-22.

So, you still may be wondering, “what’s special about 22?” Good question! Answer: nothing! Other numbers were considered but shot down for conflicting with famous releases of books and movies, like 11, 18, and 14. So, they picked 22, because it has the repetition of one number—just like 11—to reflect the repetition within the novel.
While it may not be groundbreaking to learn that a type of logical fallacy places its origin in a book, it’s still interesting to see the effect that things can have on language. So, now you know the origin of the famous Catch-22: a WWII novel about some aviators trying to escape military bureaucracy. Unfortunately, this still doesn’t help me with that summer job.

Don’t get me wrong, the books were fantastic, but I’m pretty sure the movies’ director only read the summary on the back cover and figured he got the general idea.

For those who aren’t familiar with the Divergent books, they comprise a young-adult trilogy written by Veronica Roth detailing a dystopian society in which everyone is divided into groups—called factions—based on personality. Being a fan of the book, I arrived to the theater in 2014 to see the movie adaptation, bouncing on the edge of my seat with anticipation… and left feeling deflated. My frustration was mostly due to the horrible choices made when adapting the books to script.

For one thing, the movie does not fully develop an understanding of the main character, Tris. Tris’s most defining conflict that drives the majority of her decisions is her struggle with selflessness and bravery, and what these traits truly mean for her. The fact that the film ignored them and their effect on her, instead portraying Tris as a cardboard vigilante teenager, made the adaptation an instant disappointment.

The film made the same mistake with Tobias, another central character. In the books, Tobias grows up overshadowed by his physically abusive father. One of the major conflicts in Allegiant, the final book, is his struggle to avoid becoming exactly like the father he despises. This is relevant to many teenagers today who want to develop their unique selves, but feel trapped by their perceived inability to avoid associations with their parent’s achievements, or break the cycle of their parents’ mistakes. Why the filmmakers felt the need to blow off this idea that so many young adults connect to—just to focus their attention on a cheesy plot and shallow characters—is a mystery to me.

Ultimately, the most frustrating part of the Divergent movies is the fact that the filmmakers completely changed the plot of the final two movies—and the manipulation of events was far from an improvement. Instead, the change made the plot feel more superficial, while important and original plot lines were left out. Characters that fans adored and cheered for in the books were also left out or majorly downplayed, and all in order to create a stereotypical action movie; the film was peppered with the kind of dramatic explosions and rapid gunfire that make for exciting trailers, but don’t add anything of substance to the actual story. The filmmakers had an opportunity to capture a terrific story with so much depth and relevance, but they unfortunately missed it.