… for Off the Page tonight! (OK, so maybe that’s not exactly how Kermit the Frog envisioned his song sung when he opened The Muppet Show, but I think he’d admire my creativity.)

It’s finally here. The one night of the year that the Writing Center steps “off of the page” and into the Black Box to explore how writing works in the “real world.” We at the Writing Center believe that it is not enough to simply accept that writing exists solely for the purpose of mastering the five paragraph essay structure and receiving one’s high school diploma; we want students and community members to rediscover how writing is a passion, an activism, and an art.

But before I can tell you about this year’s wonderful guests, I must address the question: What exactly is Off the Page?  I have heard musings that it is a club, while other people seem to have no clue as to why videos of John Mark Nelson singing on a ship and a man performing a poem have been playing on the Morning Announcements.

Off the Page is a night of conversations with local professionals that use writing in their daily lives. Student Writing Coaches sit down with these guests to interview them, asking them about their histories, passions, and experiences with writing. It happens once a year, and this year it’s taking place tonight (that’s right: March 19, 2015) from 6:30 to 9 PM.

This year, Off the Page can be best described as “performance-oriented.” MHS-based band Green Beans will be performing from 6:30 to 7 pm, and MHS senior Anna Weber will be performing an original spoken word piece to start the night. Our guests include spoken word poet Guante along with MHS grad and professional singer-songwriter John Mark Nelson. These guys are kind of a big deal. In addition to speaking at colleges and universities across the country, Guante was recently invited to speak at the UN. A poet, hip-hop artist, teacher, and activist, Guante is someone you should definitely get to know. Needless to say, we are looking forward to hearing from him in both his interview with senior Ben Sosin and his spoken word performance to follow the interview. John Mark Nelson released his album Waiting and Waiting to great acclaim just two months after graduating from MHS in 2012, and has recently been touring with his band to perform from his latest album, Sings the Moon. Junior Gigi Anderson will be interviewing John Mark to hear what life as a professional songwriter and performer is like.

Check out this video of John Mark Nelson’s song “Boy,” which has captured my heart.

This next video is of Guante performing “Quicksand,” in which he comments on what it really means to be politically active.

I highly encourage you to attend Off the Page this year. It will be a night of great performances and conversation, and what more could you want from your Thursday night than to go be informed and inspired by two great local artists? Tickets are sold at the door- I hope to see you there! 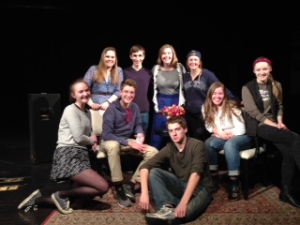